A key insight in the Anthropocene is that although we should continue to learn from history, we must also be prepared for entirely new types of trends in the future, and emerging drivers of change. This work card describes how you can use horizon scanning to start engaging with an uncertain future.

Start with a desktop scanning to gather initial information about emerging drivers and trends and then hold a stakeholder meeting or workshop to collectively scan for and discuss emerging issues. You may also want to involve other experts in this work, such as scientists. Make use of the historical time line to illustrate what and how much previous changes has occurred. Then cast forward. This can be done in small groups, each working on an emerging trend, then combine with other groups to discuss the implications.

The planet is approaching critical planetary boundaries, and the hyper-connected reality of today means that new social trends can establish themselves faster and at larger scales than we have ever seen before. Before moving into Phase 4 where you will design strategies for change it is well worth the time to start thinking about how the future might be different from today. 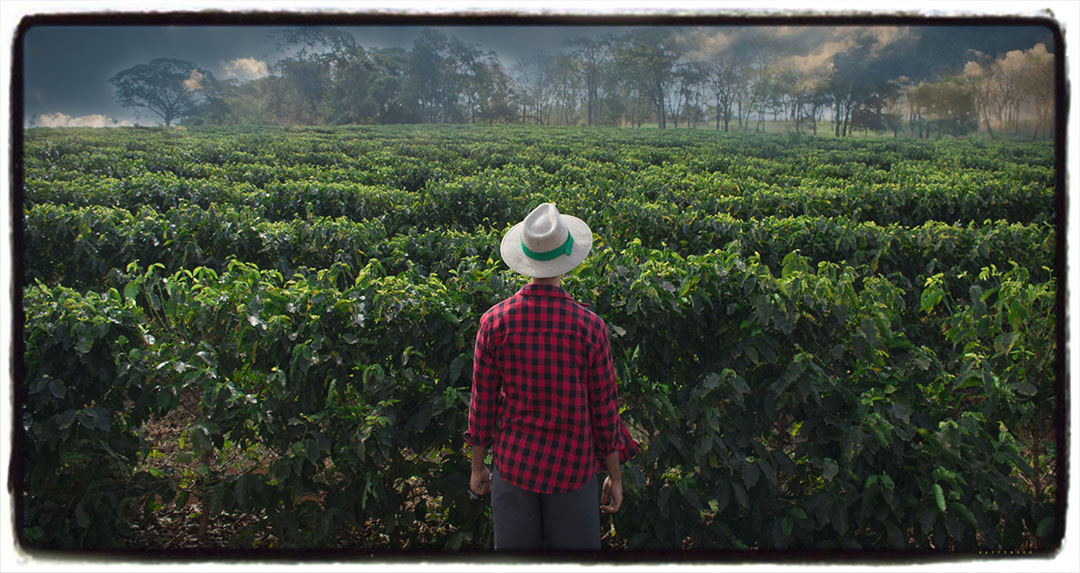 Farmer looking at his coffee plantation, Brazil. Although we should continue to learn from history, we must also be prepared for entirely new types of trends in the future. Scanning the horizon for emerging drivers and trends is important to be able to develop strategies for change that will work. Photo: iStock.

Horizon scanning is a systematic process to identify and explore novel trends, which can serve as an early-warning approach for dealing with negative un-knowns, and a “bright spot detector” for emerging opportunities. Horizon scanning is often used to support policy decisions. In the area of conservation and biological diversity it has revealed such unexpected trends as the expansion of disease through the release of pathogens in melting permafrost. Horizon scanning has also revealed how technological trends, such as plant breeding for salt tolerance, present opportunities for improved management.

There are different ways to go about conducting a scan of less well-known, but foreseeable, threats and opportunities. What is important is to use an approach that is systematic, rigorous and consults key sources of information. To conduct a solid analysis, you will likely also need to consult with experts outside of your system. Revisit the work you did previously on cross-scale interactions (Phase 2, work card 15, and Phase 3, work card 20) and use the attached discussion guide to help structure your exploration.

Based on your understanding of how the system currently works and the mapping that you have just done of emerging drivers for change, the next task is to develop a set of future scenarios. These should reflect a number of alternative, but plausible, future development trajectories for your system. This work card describes a simple approach to scenario planning.

In a workshop setting, use the outputs of Work card 23 to develop a set of plausible futures using one of the various widely available scenario planning approaches.  Use creative ways to illustrate the scenarios. With the coalition, explore the implications of the scenarios for your Change Narrative, looking for new insights and opportunities.

Thinking about the future as a set of alternative possibilities helps us remember the inherent uncertainty of the Anthropocene. Therefore, it is useful to spend some time on scenario development before moving into the problem-solving mode of Phase 4, where there is always a risk that people become blinded by their ideal visions about how the system “should develop”. 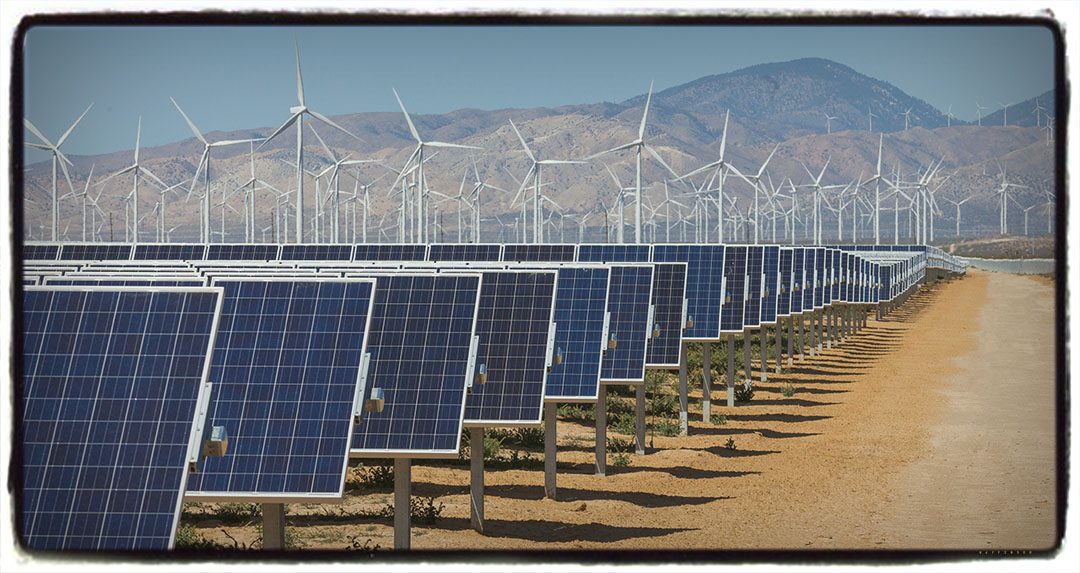 Photovoltaic power and wind turbines in the Mojave Desert, California, USA. Thinking about the future as a set of alternative scenarios helps us remember the inherent uncertainty of the Anthropocene. The purpose is to open up our thinking about multiple possible developments and how to make decisions when there is a high degree of uncertainty. Photo: N. Deshager/Azote.

It is important to remember that scenarios are not meant to be predictive. Rather, the purpose is to open up our thinking about multiple possible futures and how to make decisions when there is a high degree of uncertainty (figure 24.1). Depending on what the current trajectory looks like, and the emerging drivers of change, this might mean acting to prevent certain future developments and to actively move towards a new trajectory that better can fulfill the aspirations among people the system. Thus, in addition to increasing the general robustness of your strategies, scenario planning may also help you identify critical decision points in time, where actions may need to be taken to avoid crossing a threshold in the system or where you may take advantage of new opportunities that present themselves.

Scenario planning is a rapidly growing field of practice, and there are many different methodologies to choose from. Scenario planning can be time consuming, but if the purpose primarily is to open up your thinking about the future, as is the case here, it doesn’t have to be. A good way to start a “light-pass” scenario exercise is to list and rank important drivers for change. The next step is to think creatively about how different combinations of these drivers (e.g. ++, +-, –, -+) might impact the system in the future. The attached case from the Makanya catchment in Tanzania, shows how this type of scenario planning approach helped thinking creatively about the future of smallholder farming and increasing the robustness of interventions made in agricultural water management. 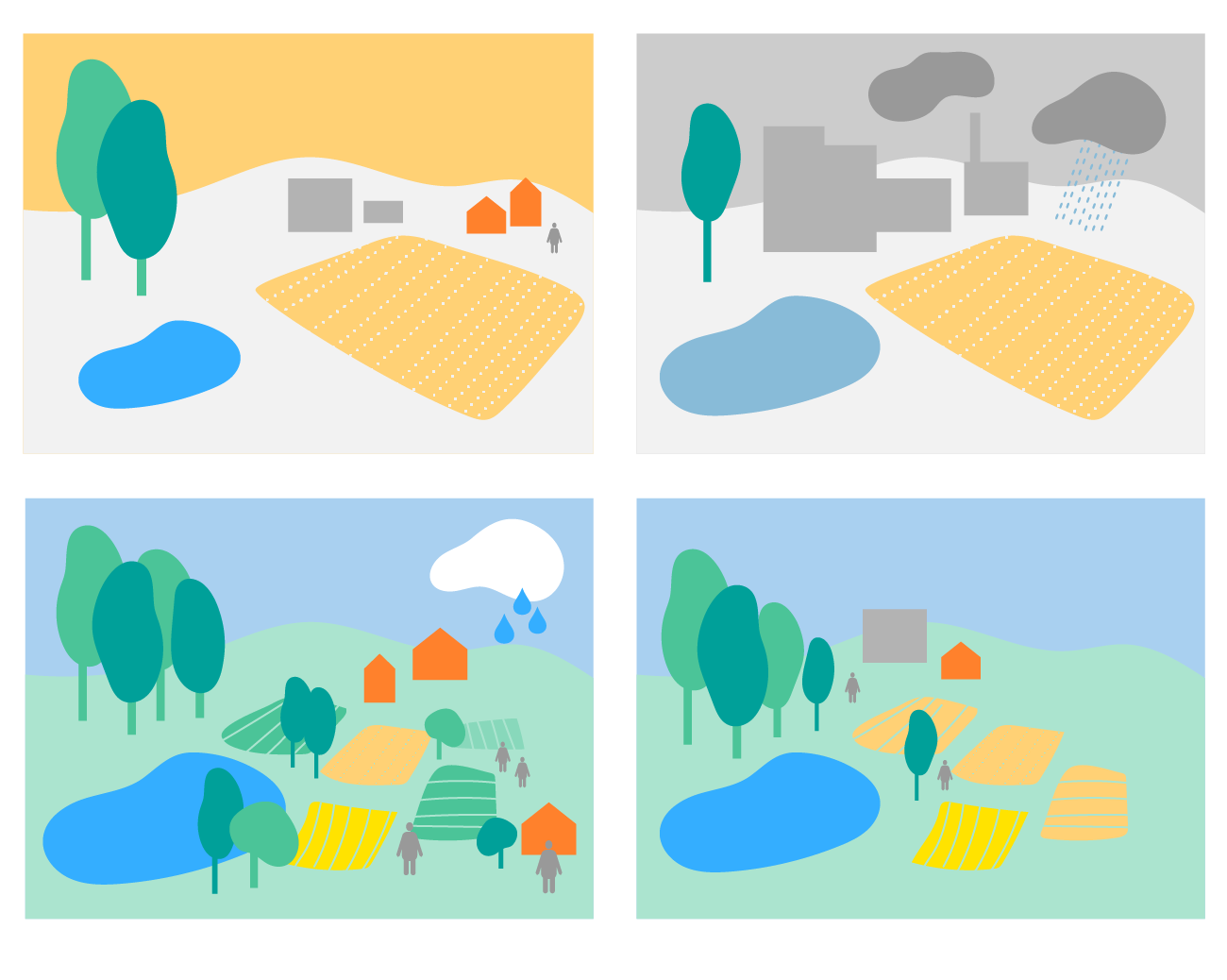 Figure 24.1 Scenarios can be used to explore some of the plausible futures of a social-ecological system. This stylized representation reflects four potential futures of a farming system. The goal of using alternative scenarios is not prediction, but rather to engage with the range of uncertainties that exist about the future. Illustration: E.Wikander/Azote

In some cases, it might be worthwhile to conduct a more in-depth scenario exercise and some research might then be needed to determine the most suitable approach to use for your system and in your context with the time, capacity and resources you have available. Scenario planning can be combined with emerging tools such as adaptation pathways to map out the possible future trajectories of the system and how they may intersect at critical points in the future.

The attached discussion guide lists a set of questions that cut across different scenario planning methods and can be used to stimulate thinking on how to integrate the scenarios you develop with your evolving system understanding, the change narrative that you have started working on, and the action strategies that you will be working on soon in Phase 4.

Click here to learn more about working with the future by Tanja Hitchert, Research Associate at the Centre for Complex Systems in Transition at Stellenbosch University

Click here to learn about the seeds of a good Anthropocene by Laura Pereira, Researcher Associate at the Centre for Complex Systems in Transitions at Stellenbosch University

The Makanya catchment is located at the foothills of the Pare mountains in the Kilimanjaro region of Tanzania, and hosts around 15 rural villages. With a semiarid to dry sub-humid climate, small-scale farming is the principal food and income source in the catchment. In 2004 to 2009, an applied research project was undertaken in the Makanya catchment, focusing on the potential of different water system innovations (such as water harvesting) for improving local livelihoods in concert with maintaining landscape integrity and ago-ecosystem health.

The project used a scenario planning approach to explore the robustness of water system innovations across a range of plausible future scenarios. During a two-day participatory workshop in Makanya, a range of different local stakeholders (including farmers, local policy makers and NGO representatives) were brought together to develop four alternative scenarios for the catchment in 2030. 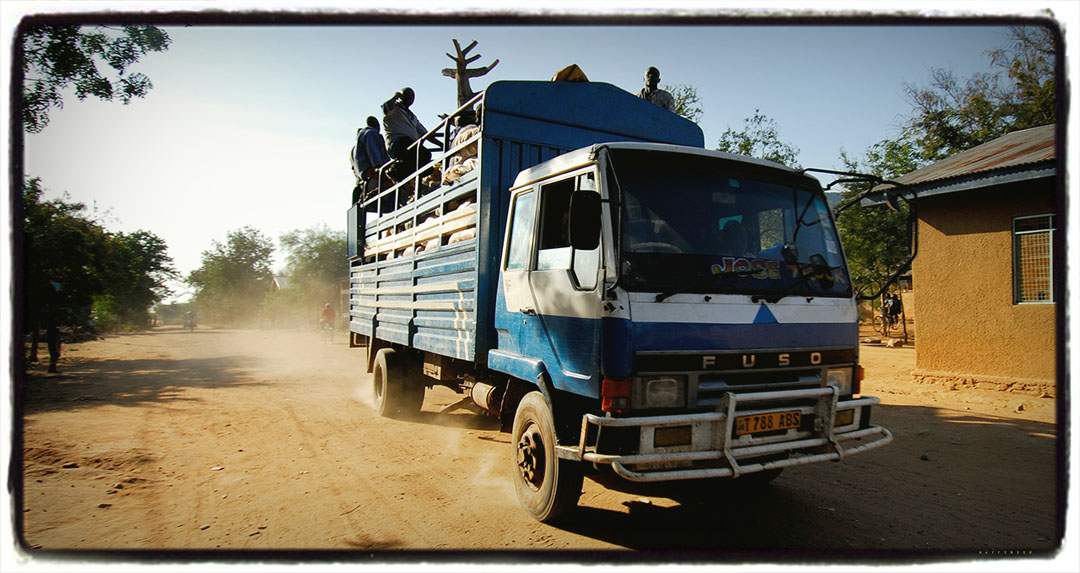 Truck on dirt road, Makanya, Tanzania. A scenario planning approach undertaken in the Makanya agro-ecosystem, helped researchers and other stakeholders think creatively about the future of smallholder farming, increasing the robustness of interventions made in agricultural water management in the area. Photo: J. Lokrantz/Azote.

Workshop participants were initially asked to brainstorm around drivers for change that potentially would have an important influence on the area in the decades to come. This was followed by a ranking exercise, where five drivers were collectively selected as those probably being both the most important ones for the development of the catchment, and those being the most uncertain, in terms of how they would influence the development.

These important yet uncertain drivers included: health; local governance; work ethics/family values; national economy; and climate. The five factors were combined together in four different ways, which formed the starting points for the alternative scenarios. Smaller groups with stakeholders then developed storylines around each of the four scenarios, considering what the landscape might look like, what the main livelihoods sources would be, and what kinds of lives people might lead in Makanya in year 2030. 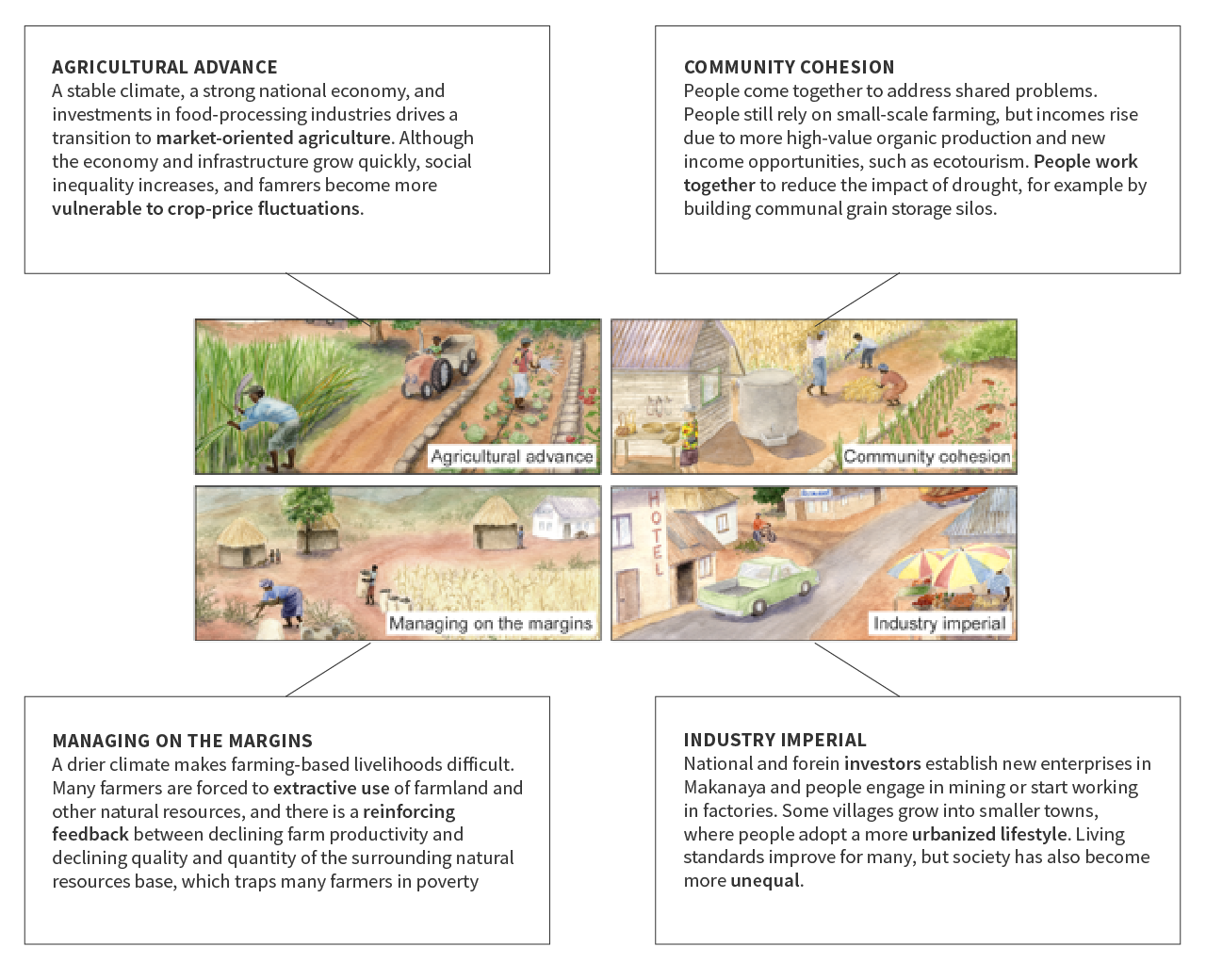 The scenario exercise revealed that no single water system technology would work well under all scenarios. With an uncertain future, this indicated that capacity-building for experimentation, innovation and knowledge-sharing might be a better investment than investing directly in a particular water system innovation that might soon get outdated.

The scenario exercise also allowed for a broader discussion around some of the hopes, fears and thoughts about the future among people in the Makanya catchment. This discussion surfaced topics such as the importance of a strong identity as farmers and livestock keepers, the preference for collective action over individual initiatives for development, and a fear of loss of local customs and changing ideals among the younger generations.

Exploring the future by looking at alternative plausible scenarios is useful prior to developing strategies for change, since it highlights the need for flexible approaches when intervening in complex systems in constant change.

Open this card Close this card
Previous
Exploring option space
Module C
Next
Evaluation, reflection and sense making
Produced by:
In collaboration with: